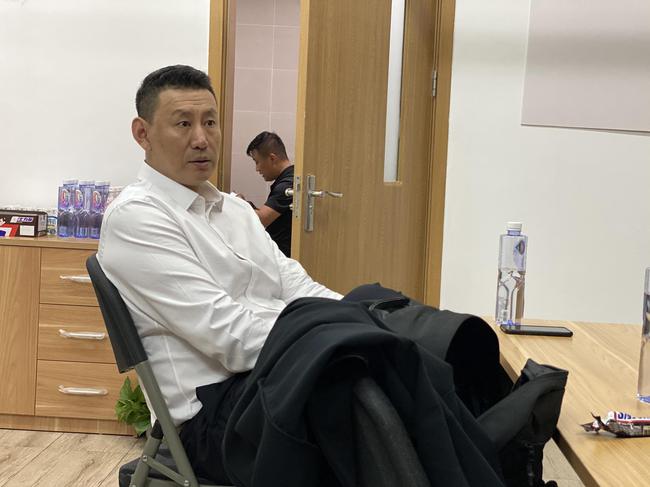 At 1:06 pm on October 17th, 14 minutes before the notified team’s departure time, I picked up the backpack I packed the night before and hurried downstairs. When I "dangdangdang" jumped onto the bus steps, I looked up He ran into the head coach Li Nan, who was wearing a black suit, leather shoes and a light blue check tie. He sat in the first row with a serious expression and looked straight ahead. It’s the first time I saw him in such a formal image that I’m used to wearing sportswear. I was so scared that I let go of my steps and greeted carefully: "Good, Director Li." But he didn’t respond. Sitting on the ground, looking serious, looking straight ahead.

1:12, all the people arrived, the bus departed early. The car was quiet. I was about to pick up my phone to process information, but was stopped by the physical coach next to me: “You can’t play with your phone on the team bus. This is discipline.” I looked up at the coaching staff sitting in front. Looking back at the players behind, no one was actually looking at the phone! You know, during the quarter-finals, whether it is starting or returning, everyone in the car is almost the same: holding their mobile phones, watching videos, and playing games. I put my phone in my bag silently, and looked at Director Li, who was still sitting straight, looking straight ahead. More than two hours later, he will make his CBA debut against Qingdao, which ranked eighth last season. In the days leading up to the debut, he would ask the old people in the team about what needs to be paid attention to in the CBA arena from time to time, but now the bus is heading to the arena and he is silent.

When I arrived in the locker room, the procedure was not much different from the past. First, we had a meeting, then the players kicked their feet and went out to warm up. Director Li wrote the key points of the game on the whiteboard and waited for the players to warm up before returning to the locker room to emphasize again. While waiting in the locker room, General Manager Shi Linjie gave him a cup of coffee, and Director Li took it over and said, "Next time, remember to warm me up." The two chatted for a while, and the general manager took a picture of him sitting and talking. The photo was sent to Hu Xuefeng, the head coach of the Jiangsu Basketball Management Center. Director Hu jokingly commented on the "nervous batch" in Nanjing dialect. The general manager read and responded and laughed. Director Li said, "What is the laugh?" He poked his head over. After reading the reply, I studied the photo for a long time. I don’t know whether to ask the general manager or myself: "Can I tell the tension in this photo? How can I tell the tension?"

When he went to the venue after the meeting, Director Li pulled the general manager, "No matter how the players are playing today, if they are not satisfied, they have to go back to the locker room to scold them. Let’s encourage them on the court. They are indeed too young for the first time. There are quite a few people in this arena, not just me."

But he was too worried. Even though he lost the game in the end, most young people, like him, were already prepared-the first three minutes of the game, Guan Xi accidentally injured and fell to the ground. Our inside broke the core pillar. , The time to test the young players came faster than expected. At the moment Guanxi was injured, Director Li did not panic. With a finger, he replaced the 20-year-old Liu Jinting who was on the CBA for the first time like him. Soon the latter raised his hand and hit a three-pointer. Liu Jinting contributed 11 points in the game. Before that, Director Li was burdened with the infamous "Jianghu is not fighting and killing, the arena is the worldliness." The first show really became a "show". He scored 20 points, 4 rebounds and 3 steals, and scored to create the draft The player debuted a new record.

is different from previous training and warm-up matches. Director Li's debut has become "gentle", without the "spitting fragrance" that hates iron and steel in the usual training field, and the angry whistle when players make mistakes in training, and only retains shouting tactics and The vigorous roar of the player's name.

The only time his voice was exceptionally loud, "It's pulling someone!" Director Li loudly reminded the referee of a push and pull action by the opposing player. The referee gave a warning to Director Li, "According to the rules, such words as coaches are not allowed. I have to blow t!" After a while, Director Li wanted to shout again. Just as he spoke, the referee turned and stared at him in a posture that he wanted to blow t. Director Li couldn't help but cover his mouth.

After four quarters of fierce battle, we still lost the game without Guanxi and the two insiders were sent off. At the press conference after the game, the reporter asked him how he felt about coaching the CBA for the first time. Director Li showed up. Slip: "CBA is not harder than the national team at all, ah... easy!" After speaking, he smiled embarrassedly, but quickly added: "CBA is sometimes harder than the national team, I need to adapt as soon as possible , Our team is relatively young, and I am coaching for the first time (CBA team). This is just coming and caught up with the epidemic. I hope we can get through the running-in period as soon as possible. "He is really not easy, and the current situation of the team is really difficult , Center Zhao Xuxin and power forward Yuan Chunnan are still recovering from injuries, and the young player Jiang Haoran who has been given the opportunity to play is also just returning from injury. The visa procedures for big foreign aid Devin Williams have just been completed and are almost still waiting to take off in the United States. Foreign aid Dez Wells was unable to play for the team this season due to a positive nucleic acid test. The newly replaced Marcus Hunter is still waiting for notification from the Chinese Embassy in the United States, and Guan Xi was injured in just three minutes. The end of the game...Such difficulties can be imagined for a coach who retired from the national team and tried to prove himself in CBA again.

But he only used a self-deprecating remark to dispel the pressure like a mountain-nearly 5 minutes of the press conference ended, Director Li just met someone he knew on the way back to the locker room, he patted the other's arm with a smile Intentional old friend said: "It's too difficult for me!" Director Li's loud voice also attracted people around him to turn their heads. Probably everyone did not expect this sentence to be infinitely amplified by the crowd during the World Cup defeat. Retelling from his mouth.

I now believe what he said at the mobilization meeting, "I am a person who likes challenges."

After all, judging him to speak sometimes requires some brainstorming. For example, in the dressing room after the game, he summarized a lot of shortcomings and said a lot of things to improve, walked out of the locker room, and quietly talked to the assistant. Coach Yi Li sighed: "These kids have really performed supernormal today."-He sincerely affirmed them, and worried that this kind of affirmation would make the players feel proud.

At the door of the locker room, Director Li was intercepted by the media for another wave of interviews. The interview was over and his debut was over. He walked into the night rain, took off his tie while walking down the steps, and unbuttoned the first button of his shirt. He moved skillfully and calmly.

It doesn’t look like he looks like a coach who just lost in his debut. However, many times in life, everything is really difficult at the beginning.